Get the most of July by setting goals


One of the regular mailings I used in recruiting through the years
focused on the importance of having and setting goals. Any competitive
athlete or coach is going to aspire to be the best they can be and hope
to come away a winner every time they take the floor. What's usually is
not on everyone's agenda is how to accomplish those lofty standards or
the steps it may take to get there. 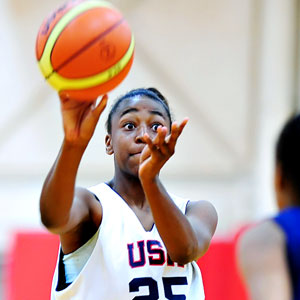 Glenn Nelson/ESPN.comThe ability to make post entry passes is one of the fundamentals that helped Jewell Loyd make the USA U18 national team.

The quote, "If you don't know where you are going, you will probably
end up somewhere else," sounds as though it was written for a lot of
basketball players. Each summer I see so many talented athletes "going
through the motions" and approaching their club games as if they were
nothing more than a trip to the mall. Those 20 days in July offer
recruiting, competitive and personal opportunities that are hard to come
by the rest of the year. To take full advantage of them you have to go
in knowing what you want to get out of the experience, approach it with a
positive mentality and stay focused on your goals.

For the most part, goals tend to be either outcome- or
performance-oriented. More often than not, outcome goals are the end
result and long-term targets. Winning a state championship, getting a
scholarship, graduating with honors or a particular grade-point average
are examples of those kinds of hopes and vision. As we approach this
year's July evaluation period, I wanted to go the other direction and
offer some performance-focused goals that might help the summer become a
stepping stone to achieving those bigger objectives.

With that in mind, here are some thoughts that might make your time
in the gym more productive and maybe catch the eye of one of those
recruiters sitting courtside.

Play each game as if it were a championship game: Up to three
games a day during the course of the evaluation period can be a drain
both physically and emotionally. Be ready to embrace every moment. If
you can show coaches that you know only one way to play they'll know
that what they're seeing is what they would get if they were to make you
an offer.

Use and improve a specific weakness: Demonstrate to recruiters
that you're not just out there to impress them but you're focused on
advancing your game. Hiding that you have no left hand or can't hit the
15-footer is less impressive than the athlete willing to use and refine a
skill that needs attention. Be better on July 31 than you are on July
6.

Work on the intangibles: Communication, team chemistry,
coachability and leadership are just a few of the things that may not
show up on a highlight film or stat sheet but are looked at closely by
recruiters. If you can show these kinds of traits in a compact and
intense schedule like July, coaches will know that you can bring them to
the table in the regular season as well.

Defend and rebound: Back-to-back games, late-night drives and
flights, as well as noisy hotels, make it inevitable that you're going
to have a bad day. Even if the ball isn't dropping or the passes aren't
finding your teammates, you consistently can get in a stance and you
always can box out and crash the boards. The Lakers didn't win Game 7 of
the NBA Finals over the Celtics because they lit it up from the floor;
they got stops and second looks. The college folks may be recruiters,
but they're coaches first and "D" and boards are always high on their
list.

Cut aggressively and with intent: Whether it's on ball, a
screen away, backscreen or maybe just a simple give-and-go basket cut,
go hard and leave your defender standing. Too many cutters move
passively and make it easy for their matchup to stick with them. Set up
every cut, make contact with your screener and read the situation.
During a long month of basketball, an explosive, hard cut will exploit a
weary opponent.

Be an effective and physical screener: Screening angles show
that you understand that you're sending the cutter somewhere and that
you appreciate that it's for a reason. Rolling to the hoop, rolling out,
or slipping shows that you recognize your own potential scoring
options. Put the same effort into freeing up a teammate as you would to
get yourself open. A good screen is the assist that never gets noticed.

Play within yourself: Know your role and commit to being the
best at it. If you're playing the post and you start overlooking outlet
passes and taking it yourself in transition you may show your handle but
also a disregard for your team. The same goes for the guards who fail
to hit the wide-open post on the block so they can jack up their jumper.
Don't think for a second that the coaches sitting courtside aren't
making a note of your choices. At the same time don't pass up the shots
you should be taking or stop posting because you didn't get the ball
last time down. Recruiters have a pretty good idea if you're about
yourself or about your team.

Travel smart: Make it a goal to eat right, get proper sleep
and stay off your feet. College coaches may not see your bad choices
from a menu, the wandering of a mall between games, or late-night
cutting up in the hotel, but they will see it in your play. If you're
looking to play your best and make the most of your time on the court
your decisions have to be smart and that may mean sacrificing a little
bit of the fun. The road is long enough without fast food, sore feet and
sleep deprivation.

When you pack your bags this summer know where you're going, what you
want to accomplish and how you're going to get it done. If it's true
that "goals are dreams with deadlines," then July is the time to set
some. In the long run you'll be better off in the eyes of your
teammates, coaches, recruiters and, most of all, yourself.

Become a fan of the site on Facebook and get updates in your news stream.

Discuss this on our Message Board

Mark Lewis is the national recruiting coordinator for ESPN HoopGurlz.
Twice ranked as one of the top 25 assistant coaches in the game by the
Women's Basketball Coaches Association, he has more than 20 years of
college coaching experience at Memphis State, Cincinnati, Arizona State,
Western Kentucky and, most recently, Washington State. He can be
reached at mark@hoopgurlz.com.

Become a fan of the site on Facebook and get updates in your news stream.

Discuss this on our Message Board

Mark Lewis is the national recruiting coordinator for ESPN HoopGurlz.
Twice ranked as one of the top 25 assistant coaches in the game by the
Women's Basketball Coaches Association, he has more than 20 years of
college coaching experience at Memphis State, Cincinnati, Arizona State,
Western Kentucky and, most recently, Washington State. He can be
reached at mark@hoopgurlz.com.